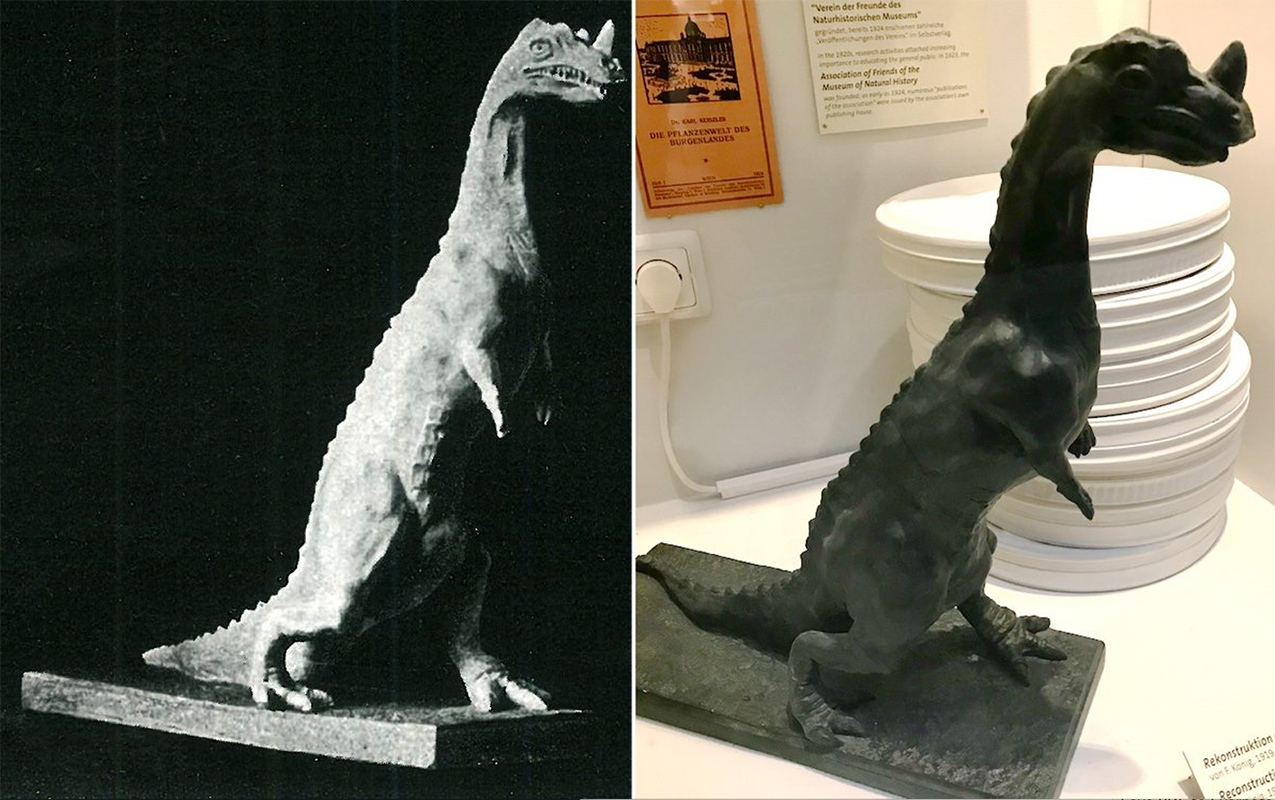 Published by Ilja Nieuwland on October 13, 2017

Last week, I spent some time in the truly amazing Vienna Natural History Museum – more about that later. Tucked away in a staircase between the second and third floors is a small exhibit about the history of the museum that devotes a lot of space to the early history of the collection (and virtually none to those seven years after 1938 the Viennese would rather forget about). In one of these cases I found the little statue you see to the right, a plaster concoction from a Dr. Friedrich König (which may have been this guy, although I rather doubt it).

Now, I already knew König from a little book he produced in 1911, which contained a series of plaster reconstructions of extinct animals (König, Friedrich (1911). Fossil-Reconstruktionen. Bemerkungen zu einer Reihe plastischer Habitusbilder fossiler Wirbeltiere. München: E. Dultz & Co; PDF file here). König’s catalog is clearly aimed at natural history museums. But it is particularly interesting because it includes endorsements by Othenio Abel (an Austrian pioneer of paleobiology, who refers to König as his “former student”), Eberhard Fraas (the first paleontologist to see the Tendaguru remains), and the Munich paleontologist Max Schlosser. These ranked among the most prominent specialist in the germanosphere.1 For me the most fascinating part follows these endorsements. König takes several pages to explain his choices in reconstructing the animals. This essay shows good familiarity with the scientific literature of the age, and tells how these have been translated into the reconstructions.

Tellingly, König makes an effort to remain out of controversies. While the sauropod dinosaur Diplodocus is reconstructed as standing upright (“after Abel”) in the catalog, König also offers a reconstruction of a “Tornierian”, crawling Diplodocus (“nach Tornier reptilhaft kriechend“).2 However, only the former is included in the booklet; a picture in the latter was distributed separately. Considering Abel’s endorsement this is not surprising, and one wonders whether it might have been a condition. After all, this was published in the middle of the “crawling Diplodocus” controversy. The resulting Diplodocus surprisingly looks even more Abelian than Abel’s own reconstruction.3

An upright Diplodocus, but…

With such first-rate support, one might have expected König’s venture to do well, but sofar I had not seen any of his models “in the flesh”, so to speak. All made of plaster, they are excellent examples of the mainstream German paleontological thought of the day. But from the catalog they come across as a bit cruder than what we’re used to from the likes of Knight or Pallenberg; surpisingly, in “real life” they look far more artistic.

Their old-fashioned nature might explain why they can rarely be found in museums nowadays. On the other hand, Knight’s statues are still everywhere, as are many by Pallenberg (especially his Iguanodon). So this might be a indicative of König’s lack of commercial success perhaps. Also, World War I probably didn’t help in persuading museums (especially those outside of Germany and Austria) to buy these excellent statues.

Unfortunately, I don’t know anything about König (I haven’t been actively looking for information either, to be honest). My question to you: do you know more, or have you seen any of these in museums? And if so, would you mind telling me about it?