When the new Berlin Aquarium opened on 18 August 1913, it had an important task to fulfill: emphasizing that the Berlin Zoo, of which it was part, was still a force to be reckoned with among zoological gardens—both as a public attraction and a scientific institution. Rather surprisingly, none of its fish, amphibian, and reptilian denizens could be seen on the outside of the aquarium building. Instead, both the side facing the zoo and the one facing the street showed depictions of prehistoric life—in mosaics, reliefs, and sculpture. On the zoo side, a colossal statue of the dinosaur Iguanodon formed an impressive entrance piece. These images served two goals: to exploit the public’s fascination with prehistoric life and also to connect such fascination with the science of past life.

Sometimes it is made out that “alternative” facts are a new, or at least phenomenon, but anyone enversed in the history of science can probably easily rattle off a few well-chosen examples. Sometimes, however, the division between what is “real” and “imagined” isn’t quite so clear, as the history of the search for living dinosaurs reveals.[1]This piece was originally part of my PhD dissertation but didn’t make it to my book American Dinosaur Abroad. A Cultural History of Carnegie’s Plaster Diplodocus (University of Pittsburgh … Continue reading

Sir Arthur Conan Doyle’s The Lost World (1912) is a strange but highly successful amalgam of adventure story and science novel, and probably his best-known work outside of the Sherlock Holmes canon. It has given rise to numerous film adaptations, including the one of the first appearances of ‘living’ dinosaurs on celluloid in 1925.

Doyle was likely inspired to write the novel after having spoken at a lunch at the Royal Society in 1910, in the presence of Robert Peary, who had just returned from his quest to discover the North Pole. In his talk, Doyle contemplated, in the light of the activities of Peary and others, whether there was any unknown part of the world left for writers of adventure stories to draw their inspiration from. Coupled with Doyle’s admiration for adventurists and his interest in paleontology, The Lost World was his answer to this question.[2]Miller, Russell. 2008. The Adventures of Arthur Conan Doyle. A Biography. New York: St. Martin’s Press, 301f.

END_OF_DOCUMENT_TOKEN_TO_BE_REPLACED

The first 6 months of 1905 saw two prominent, celebrity-studded, and copiously publicized unveilings of full-size dinosaur exhibits. In February, the American Museum of Natural History (AMNH) in New York unveiled its Brontosaurus mount; in April, Andrew Carnegie’s donation of a cast of Diplodocus carnegii (his “namesake,” as he liked to call it) was presented to the British Museum in London. As Lukas Rieppel explains in his book, Assembling the Dinosaur, neither the timing, nor the place, nor the form of these events rested on coincidence.

Yeah, I wrote that. It has been out for a while in fact, but I forgot to put it on the blog somehow. Below, I will try to tell a bit more about it. Also, my publishers, University of Pittsburgh Press, posted a Q&A with yours truly at the time of the presentation we did at the Carnegie Museum of Natural History in Pittsburgh. If you don’t need more information and want to order it right away (which I obviously wholeheartedly encourage), this is one place where you might do so. END_OF_DOCUMENT_TOKEN_TO_BE_REPLACED Last week, I spent some time in the truly amazing Vienna Natural History Museum – more about that later. Tucked away in a staircase between the second and third floors is a small exhibit about the history of the museum that devotes a lot of space to the early history of the collection (and virtually none to those seven years after 1938 the Viennese would rather forget about). In one of these cases I found the little statue you see to the right, a plaster concoction from a Dr. Friedrich König (which may have been this guy, although I rather doubt it). END_OF_DOCUMENT_TOKEN_TO_BE_REPLACED

(This is a repost of a short piece I wrote for the Shells and Pebbles blog a while ago, but I thought it would not be out of place here and have adapted the text somewhat. In addition, it gives me the opportunity to show off Heilmann’s whole Iguanodon picture, above).

The Danish artist-cum-scientist Gerhard Heilmann, who became famous for his book The Origin of Birds, published a little-known, short piece about Iguanodon a few years later, in an issue of Othenio Abel’s journal Palaeobiologica, dedicated to the Belgian paleontologist Louis Dollo. In many ways, this Iguanodon is much more ‘old-fashioned’ than his dynamic restorations in The Origin of Birds. First, it is positioned much more vertically. Although its tail doesn’t rest on the ground in the way that, for example, Charles Knight reconstructed his bipedal dinosaurs, it is still an altogether more stodgy-looking affair. This is further enhanced by the fact that the animal now looks very iguana- (and therefore reptile-) like.

END_OF_DOCUMENT_TOKEN_TO_BE_REPLACED (This is a repost of a short piece I wrote for the Shells and Pebbles blog a while ago, but I thought it would not be out of place here. However, since I didn’t really investigate the origin of the feathered dinosaur idea, I’m a bit unhappy with my assertion made here that Reichel was the first to propose the concept. Hence the question mark).

While the rest of the world was dedicating way too much time and resources to exterminating one another, Switzerland remained a relatively tranquil spot in 1941 Europe. In that year, the micropaleontologist Manfred Reichel published an article outlining his views on the ‘first bird’, Archaeopteryx lithographica. Reichel’s text but particularly his illustrations are at least partly inspired by the work of Gerhard Heilmann in his very influential The Origin of Birds, a book that was to dominate the field of avian and flight evolution for decades afterwards. And like Heilmann, the exquisite artwork serves to support the ideas set out in the article. And like Heilmann, Reichel can be very critical of earlier ideas.

Read more on the Shells and Pebbles blog 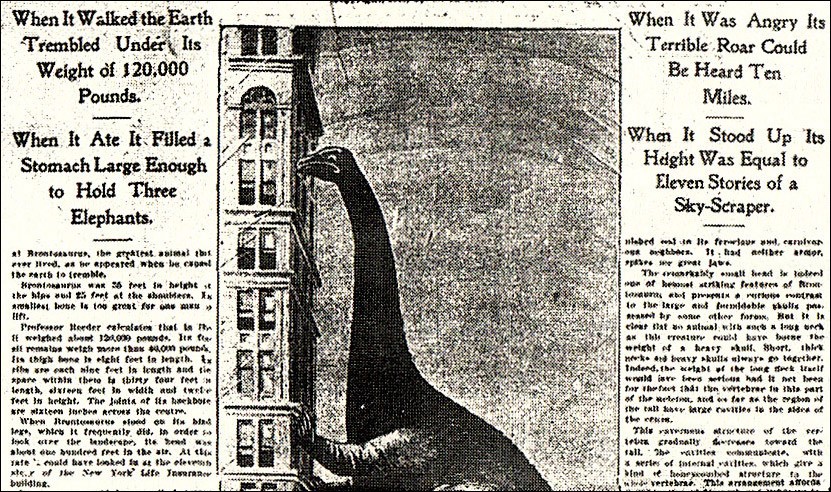 Parisians who visited a newsstand or book store in the spring of 1886 were confronted with the frightening prospect of a dinosaurian intrusion into their sixth-floor apartments. It was introduced to them by a poster that was part of the advertising campaign for French author Camille Flammarion’s new book (and newspaper serial) Le monde avant la création de l’homme (‘The world before man’s creation’).The whole approach of the publicity campaign turned out to be a good indication of the tone of the book. Flammarion’s book was a work of popular science, and sought to awe and entertain its readers as much as inform them. Although the rather overweight dinosaur here borrows heavily from the reconstructions made about fifteen years earlier by Benjamin Waterhouse Hawkins for the Crystal Palace exhibition, the image of a dinosaur standing next a high building looking into its top floors would prove compelling enough to last.

Read more at the Shells and Pebbles blog